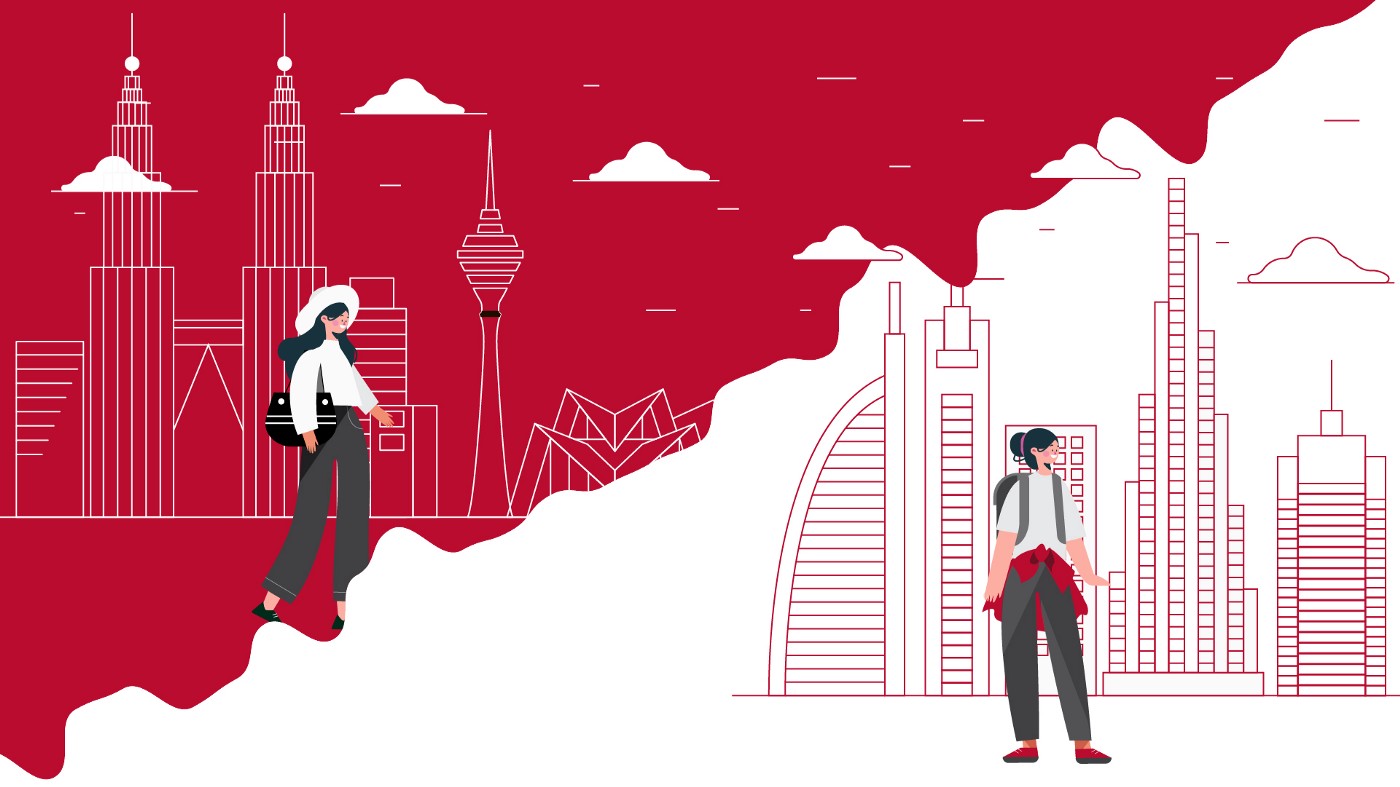 The road to tolerance begins when you walk a mile in another’s backyard.

It all started with this unexpected suggestion:

“You should consider working from another country for a while. Gain new perspectives! Learn about different cultures!”

One thing led to another, and next thing I knew, I was applying to test the pilot of the Redhill Live and Learn Immersion Programme — a new cultural immersion initiative by Redhill. Essentially, cultural immersion is where an individual actively tries to integrate into an unfamiliar community by working and living like a local, which also promotes a better understanding of nuance.

Under this programme, selected Redhill team members will spend a month or two working and living in a different country — as long as Redhill has an office there. This will give them the chance to learn about new cultures, gain international work experience, and meet overseas colleagues.

Ultimately, it was decided that I would spend a month in Dubai, United Arab Emirates (UAE), for two reasons.

One, Redhill had set up a new office there. Two, more business opportunities were cropping up in the Middle East and North Africa (MENA) region, making it increasingly important for Redhill. More familiarity with the region and culture could only be a good thing.

So it was that after two weeks of whirlwind planning and packing, off I went to immerse myself in Dubai.

I’ll be honest — before this, the most time I’d ever spent in Dubai was a few hours in transit at the airport. I didn’t know much about it beyond some vague ideas about wealth, heat and Islam being the majority — and official — religion. So I did some initial research and made some interesting discoveries.

Did you know that foreigners significantly outnumber locals in Dubai? I didn’t. Close to 90 percent of the population is foreign, with Indian nationals being the largest demographic.

I also found out that living costs were much higher than in Malaysia, primarily because Dubai must import a good deal of its food — agriculture is difficult in the desert.

Additionally, checking the weather forecasts suggested that it would be unrelentingly hot and dry in Dubai, so I tried to pack light but modest clothing.

But knowing and experiencing are two entirely different things.

The majority Indian population is just a statistic until you see the ubiquity of Indian spices and dishes in the local supermarkets and eateries. Higher living costs really hit home when you buy liquid soap at nearly RM40 a bottle instead of the RM20 you’re used to. (Note that Dubai’s currency is only about 1.2x that of Malaysia, so it’s not really a conversion issue.)

And then there’s the weather — the dry desert heat becomes all too real when you’re standing under the sun, feeling like your skin’s baking to a crisp, but you haven’t sweated a drop.

But over time, I adapted. I learned to dress very light but also carry a jacket for air-conditioned shopping malls. I bought groceries at less central supermarket outlets after finding out that prices within the same chain could vary based on location. And after a few expensive ride-hailing trips, I realised that local Hala taxis would always be the cheaper option and switched to using them.

That’s the beauty of cultural immersion — not only do you get the experience, you also get the chance to embrace the change and adapt to it in your own way.

The search for cultural insight

I actively paid attention to difference during my time in Dubai. Out of respect, I tried to avoid eating or drinking in public during the Muslim fasting month of Ramadan. I marvelled at how everywhere, from taxis to roadside halva kiosks, had contactless payment facilities. It was so easy to go cashless!

I navigated all 12 million sqft of Dubai Mall easily with its own location app and decided that other malls could learn a thing or two from it. I visited architectural wonders like the Museum of the Future and bastions of tradition like the old quarter of Deira, finding myself captivated in equal measure by the prevalence of Dubai’s ambition, innovation and drive.

Taking a leaf out of my extrovert father’s book, I went out of my way to talk to people to get some local perspectives and it was a fascinating experience.

A Pakistani desert tour driver spent 15 minutes lamenting to the entire car that foreigners can’t become UAE citizens, then missed a turn while arguing women’s rights with my seatmate, a fiery female Israeli programmer who once served in the army.

A Filipino shopkeeper told us over steaming cups of tea that one of the best things about Dubai was that it doesn’t impose income tax, allowing her and her husband to give their kids a good life.

A Nepalese cab driver insisted that according to his friends, Malaysia was lovely but not safe (“a lot of crime”), but happily, Dubai was both. (I did stand up for Malaysia. It didn’t help!)

What I found miraculous was that most everyone I met (including the three above) were unanimous in praising Dubai’s safety — an impressive achievement in such a diverse city. I’d count myself one of them too, now. I never felt unsafe walking the streets of Dubai alone, even late at night and miles away from home.

Besides satisfying my own curiosity, this active engagement was also for my professional growth as a writer. I write for Redhill’s clients across the world — including within the MENA region — and effective writing requires familiarity with the interests and nuances of each market.

What industries are important? What issues do people care about? What is taboo and what isn’t? I resolved to learn as much about the local landscape as I could so that I could convert that newfound insight into more resonant pieces, as well as a more diverse perspective for my team.

This paid near-immediate dividends. One of the first jobs I had to do upon returning to Malaysia was produce an article for a Dubai-based company, and I found it infinitely easier to write with the context I’d picked up during my stay in Dubai. Desktop research could have filled in the gaps, but it’s always better to write about something you’ve lived through instead of just heard about — and it always shows.

A different kind of teambuilding

Getting to see and experience a new place is always fun and exciting, but for me, one of the things I was most looking forward to in this cultural immersion trip was the chance to connect with distant teammates.

Anit, Redhill’s Managing Director — Middle East and Africa, was my local colleague in Dubai. I had met him for a few hours on a short trip to Singapore, but it was only in Dubai that I really got to know him as a person.

At once gracious host, resident expert and consummate professional, Anit patiently answered my countless questions and even sprinkled in industry-specific tidbits of knowledge; learning from him that the ‘PR’ role in many Dubai companies usually involves handling work visas instead of press releases was a singularly unique revelation. He also introduced me to the wonders of Indian milk tea, and teatime became a shared joy.

Two weeks in, Natalie, the go-getter Managing Director of Redhill from Singapore, also joined us. They say three’s a crowd, but in this case I think it was just right.

Together, we attended the Arabian Travel Market trade fair, where we marvelled at the ultra-elaborate displays and met a contact for a spontaneous catchup outside the exhibition hall doors, where he unloaded a wealth of insights that we tried our best to absorb in a thoroughly inadequate 10 minutes.

We also drove to Abu Dhabi and visited the Abu Dhabi Global Market, where Redhill has a presence, before doing an impromptu tour of the stately capital of the UAE and listening to Anit give us an abridged history of the UAE’s politics, economy, and society.

Last but not least, I even visited the new Dubai office in Dubai Media City and had the honour of being the first non-local employee to work in it! (I asked Anit to name a chair after me. I don’t think he did, somehow.)

Cultural immersion is where an individual actively tries to integrate into an unfamiliar community by working and living like a local, which also promotes a better understanding of nuance.

Having the chance to meet and work with both Anit and Natalie added a much-needed dimension to my Redhill working experience.

Anit was able to provide valuable insight on the business environment specific to the MENA region, as well as help Natalie and I navigate the hidden nuances of local culture. Meanwhile, Natalie contributed her unique perspective and work ethic as a female leader, along with offering critical context on Redhill’s wider ambitions, which helped shed light on future plans.

Most importantly, however, working alongside each other and sharing new experiences in person helped me get to know them as complete individuals, not simply as friendly floating faces and disembodied voices on Teams calls and text chats. Our relationships as colleagues and friends gained more depth as a result — something that pure online interactions simply can’t replicate.

For me, a key takeaway from the Redhill Live and Learn Immersion Programme is that cultural immersion is one of the best ways to dispel inaccurate, misguided and outdated assumptions — as long as you go into it with an open mind.

Before I went to Dubai, many friends and family expressed their concerns. “Is Dubai safe for women?” “It’s all desert, is there anything to do there?” “Do you have to dress very conservatively?”

Admittedly I, too, had my initial reservations due to a fear of the unknown. But having now been there, I can say that yes, Dubai is safe; yes, there is tons to do here; and no, Dubai is fairly liberal. Judging by the responses I got, I like to think I changed some minds.

In a workplace context, cultural immersion also promotes better work relationships and creates better synergy between international colleagues, which is especially important for an agile organisation like Redhill that has dispersed teams across the world.

Through the Programme, I worked with colleagues that I would never normally meet in entirely new markets. I saw first-hand how they operated and the challenges they faced. I learned how I could better support them and got to know them as people outside of the office.

The world is getting smaller and more connected, yet the closer we get, the more easily differences seem to divide us. This seems especially true this year as destructive global conflicts and landmark judgments (or their overturning) ignite raging debates around what an equal, inclusive, and tolerant world should look like.

We need to make the effort to step out of our own bubbles and understand cultures and communities beyond our own. When we walk in another’s shoes, we come one step closer to becoming global citizens that are more engaged, tolerant, and accepting of others — and also one step closer to building a world that espouses the same.