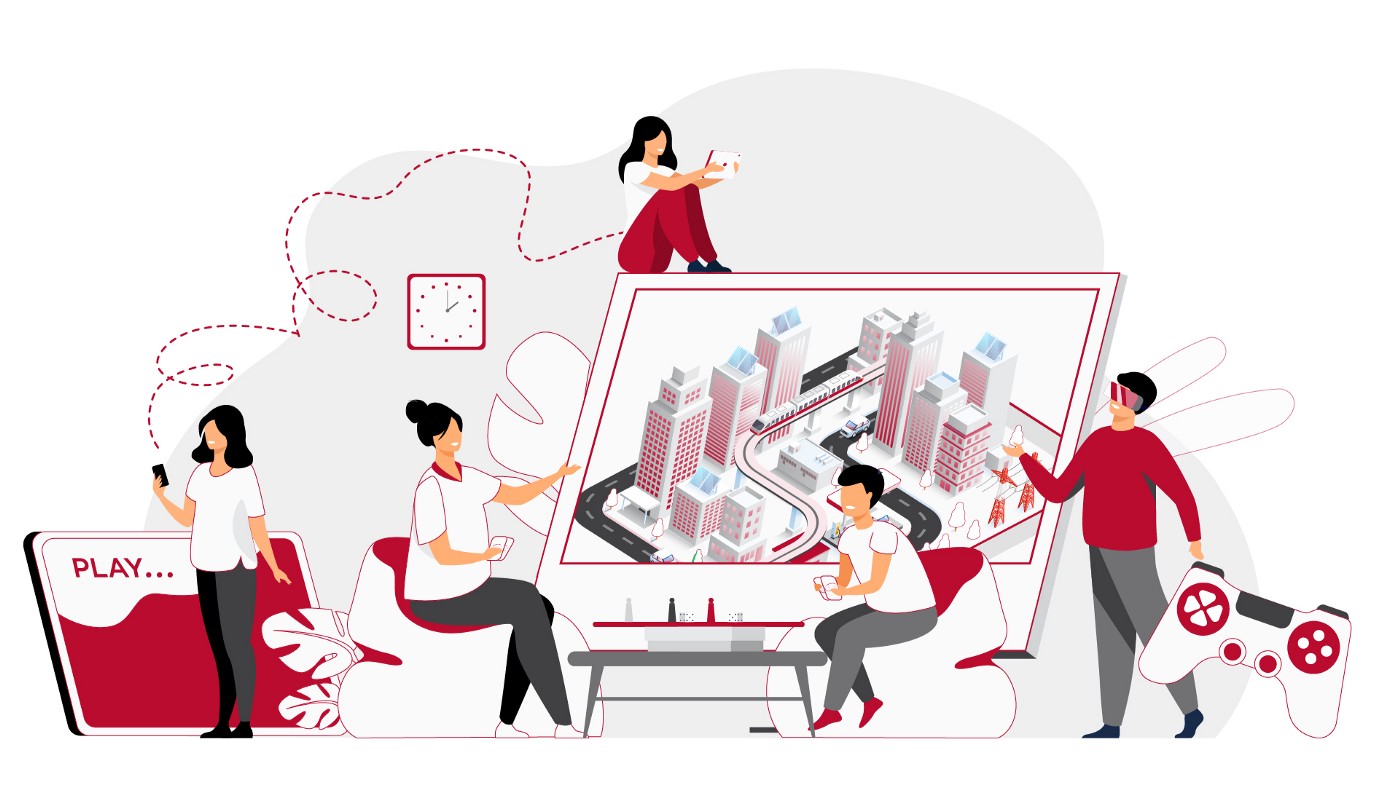 How gaming has helped society level up

Let the games begin… transforming our lives for the better.

I never realised just how much games have impacted my life till I looked back at my childhood. Experiencing first-time betrayal through a +4 UNO card (truly infuriating), discovering bankruptcy by losing all my houses in Monopoly, and running face-first into hard pillars in real life while catching virtual Pokémon in Pokémon Go — I’ve got to give credit to gaming for teaching me some pretty important life lessons.

That’s just my experience with gaming, but I’m sure it’s not unique. Even if we don’t realise it, games have always been a part of our lives in some way. Most of us see gaming as a mere hobby or pastime — something that’s done as a cure for boredom or to de-stress.

But in recent years, gaming has also evolved to a point where people can consider it a legitimate job or business, especially with gaming-focused monetisation platforms such as Twitch taking the world by storm.

Put it all together and I wonder: what is the overall impact that gaming has had on our society? In my adulthood, I’m not such an avid gamer anymore, but I still acknowledge how games have changed my life. When that impact is multiplied by the experiences of millions of people, it’s hard not to notice the correlation between the evolution of gaming and societal development.

If we think about games in our world today, perhaps a few popular online ones might come to mind — Among Us, Wordle, or even Call of Duty. However, the definition of what constitutes a ‘game’ goes far beyond current online iterations. Chess is a game, albeit focused on strategy and intellect. Even the Olympics are also technically games, but with a focus on elite athleticism.

While modern games have been getting a bad rap from the public because of concerns about their addictive nature or adult themes, we shouldn’t ignore the positives that games overall, both modern and traditional, can and have brought into our lives. There are many instances and examples through the years of games helping us develop our mental and physical capabilities.

Chess is one of the most obvious examples, having developed a reputation as an intellectual pursuit by testing the wit and strategy of the world’s greatest minds. But there are also games like Pokémon Go, which succeeded in getting players to be social and active by making them walk around their neighbourhood to catch Pokémon. Even ground-breaking concepts such as the metaverse took pointers from the graphics and concepts present in digital games decades ago.

Games are changing our lives — whether we know it or not.

For millennia, humankind has sought to make learning fun — and how better to do that than to gamify learning?

Known as the ‘oldest tool of education’, games have long challenged learners to develop their analytical and problem-solving skills. One example is the deceptively simple mancala, which dates back to Ancient Egypt and has been adapted and played by many cultures around the world.

Coined as ‘pallankuzhi’ in South India or ‘congkak’ in areas of Southeast Asia, this game has been instrumental in teaching young children how to count as they calculate the stones or marbles that they collect against their opponent in the game.

Today, games are still being used as an educational tool, albeit via different mediums such as the digital space. Games such as March Mammal Madness or Jumpstart have respectively taught cognitive skills and the fundamentals of math, language, science, and even art to young players. More recently, Roblox is gaining popularity for giving kids their first taste of coding, 3D modelling, and animation.

The definition of what constitutes a ‘game’ goes far beyond current online iterations, and it’s important for us to recognise the many positives that games, both old and new, have given us.

There is a growing case to use video games more actively in education, and it might be exactly what is needed to build a learning foundation for future citizens of a digital society. Digital or no, however, the fact remains that gaming and learning have always gone hand-in-hand to some extent.

Perhaps one of the biggest draws of games is that they have the ability to keep us engaged. From adrenaline-pumping missions to challenging logic puzzles, games keep us locked in. I never gave this feature conscious thought until I entered the working world and noticed that businesses were actively gamifying their ads to gain and retain audience engagement.

As a consumer, this makes perfect sense. Instead of mindlessly staring at a static ad, I now have the less boring option of playing a quick game, which requires me to pay attention and makes me more engaged. Businesses can capitalise on this opportunity by embedding call-to-action buttons at the end of their gamified ads to lead me to their apps’ download or purchase pages. It’s a win-win for both the brand and consumer, really.

Beyond ads, e-commerce platforms are also using minigames to keep people logging in. Shopee, for example, has a ‘Shopee Farm’ where if you diligently plant seeds and water plants every day, you can earn Shopee Coins to be used for online purchases. The idea here is that the more time people spend on the app, the more likely they are to buy something — especially when given a small incentive like small amounts of Shopee Coins.

Perhaps one of the biggest draws of games is that they have the ability to keep us engaged.

Gaming offers variety in consumer engagement avenues for businesses beyond traditional in-your-face hard-selling, especially with the introduction of technologies such as artificial intelligence (AI) and augmented reality (AR).

For instance, fashion brands such as Kohl and American eagle gamified their store experience through AR features via Snapchat for consumers to participate in ‘virtual try-ons’ of their desired outfits. The new wave of digital fashion is a clear illustration of how industries are evolving by gamifying their retail strategies.

This has significant implications for not just consumer purchasing behaviour, but also how customers interact with brands and what they expect brands to deliver — thus driving change in a fundamental part of society.

When we think about art imitating life, it’s certain that games have done that in their early stages. However, as technology advances and we progress towards a convergence of the physical and digital, the reverse is gradually proving true.

With the evolution of technology, games became increasingly more sophisticated and realistic. Developers experimented with new concepts and systems in the virtual world but often grounded them in real-world logic for realism. They also introduced new business models such as free-to-play and doubled down on existing models like microtransactions.

Slowly but surely, signs are emerging that these hallmarks of modern games are becoming the building blocks of our digital future. The Sims, for instance, came out over two decades ago and gave me my first glimpse of ‘living online’ before social media was ever a thing. Now, as I look at the ever-growing metaverse, I can’t help but draw parallels between its virtual models and The Sims because they look so alike.

When we think about art imitating life, it’s certain that games have done that in their early stages. However, as technology advances, the reverse is gradually proving true.

Even in terms of financial systems, there is much that we can take from games. The metaverse is using microtransactions, which have long been a familiar concept in the gaming world. There are some differences, of course — namely the metaverse’s blockchain operating base and the fact that there is no single authority controlling the real-life value of virtual assets and currencies (yet). But it’s hard to deny the influence of games in us reaching this point.

In the pursuit of fun and competition, games have always been an integral part of human history. They challenge our minds in problem-solving and our bodies in physical exertion. Most importantly, they push us to innovate and adapt, helping us grow as we learn to overcome new obstacles and trials.

It’s quite remarkable to experience my childhood games becoming, in many ways, the basis of incredibly complex technological developments today. Whether it is in transforming business practices or entire ways of life, it is evident that games will continue to incentivise a myriad of innovations in the digital space and beyond.

I’ve been privileged to see this transformation unfold first-hand, and I’m very excited to see how else gaming can help drive the advancement of our society!

Bringing communications to life with animation Should brands participate in the metaverse? Who is decentralised finance really helping?