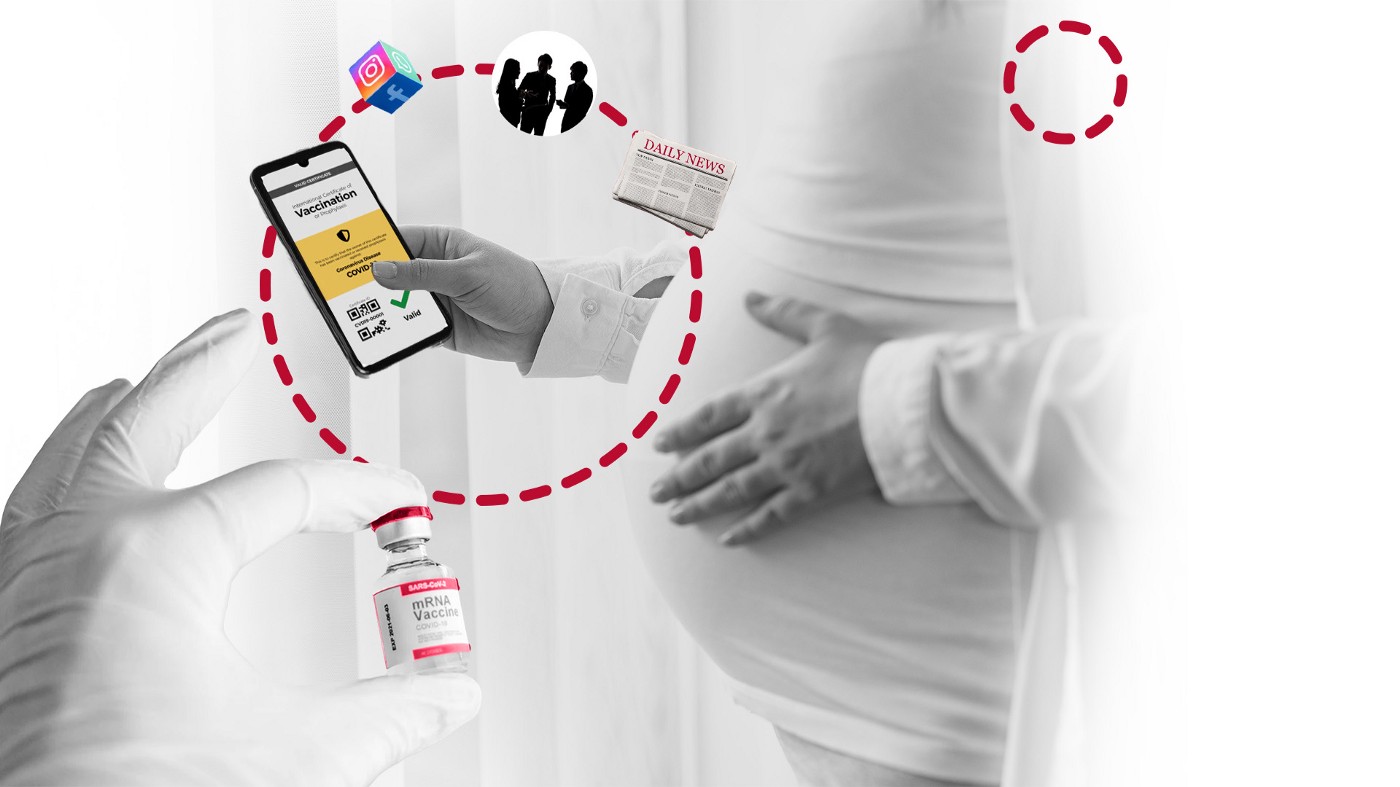 How a shot of awareness can change the world

I launched an awareness campaign that helped make pregnant women eligible for COVID-19 vaccinations in Australia.

There’s a reason we talk about the ‘new normal’ instead of ‘going back to normal’. Last year, an Ipsos survey for the World Economic Forum showed that nearly nine in 10 people across 27 countries didn’t want the world to return to how it was before the pandemic — they wanted it to change.

Since almost all of us agree that the world needs to change, let’s do it! But how can we change the world — or at least, maybe change just one little thing in the world to start off with?

Well, it’s simpler than it looks. All you need is a little bit of awareness.

As Redhill’s ANZ Account Manager in Sydney, Australia, I’ve seen what awareness campaigns can do for our clients. But two months ago, I had the privilege to harness the power of awareness myself— when I helped pregnant women become officially eligible to be vaccinated against COVID-19 in Australia.

The issue: pregnancy and vaccination in Australia

This all began when I became pregnant myself early this year. I was (and am) lucky to be within an organisation that empowers its employees — no matter their gender, race or parenthood status. Where I wasn’t so lucky, however, was to be pregnant in the middle of Sydney’s COVID-19 Delta variant outbreak. The Delta variant is at least doubly infectious compared to the original strain.

Until 23 July 2021, Australia was one of the few countries that didn’t consider pregnant women as a priority group for vaccination — despite experts advising that pregnant women and their unborn babies were at higher risk of suffering severe outcomes from COVID-19.

I’ll spare you the details; in a nutshell, getting COVID-19 can be really bad for both mum and baby. But since mothers-to-be weren’t a priority group, we couldn’t get the vaccines unless they had some other underlying medical issue.

As you can imagine, I wasn’t too happy about being more vulnerable to COVID-19 yet also being unable to protect myself by getting vaccinated. In early July, I spent hours on the phone with everyone from my GP, the hospital’s maternity ward and even the New South Wales and national Australian COVID-19 helplines to find out why, despite advice from worldwide and Australian health authorities, pregnant women were still not eligible for COVID-19 vaccination in Australia.

It was to no avail: no one seemed to have an answer. That’s when I decided to do my part and bring in change.

The method: making the issue a priority for three key agendas

It seemed to me that most people were just not aware of the situation or how this exclusion could impact the health of pregnant women and their unborn children in Australia.

The plan was therefore to raise enough awareness that the Australian government would give its pregnant population official eligibility to receive the vaccine, just as they were already doing for other vulnerable populations. I started by researching the issue to be able to fully grasp and summarise it. A change wasn’t just needed — it was rapidly needed. Then came the next step: spreading the word.

Ever heard of the agenda-setting theory? According to this theory, the media shapes and frames the issues that it thinks should be important to us, the public, via the news it chooses to publish. More media coverage means more public awareness, which lends the issue more weight. Both the public and media agendas can influence the final agenda — policy — and thus drive impactful change.

Thus, successfully triggering any kind of change requires the issue at stake to capture the attention of these three key agendas.

When appealing to these three agendas, how you raise awareness comes into play. I knew that it wasn’t just about what I wanted to say, but how I would make myself heard — and more importantly, by whom.

By its very nature, the media is a great — if not the best — platform to raise awareness on an issue because it reaches both the public and relevant stakeholders. After all, we’re all people and we all consume media. It’s also an excellent stage for productive debate to happen, which allows others to back a cause up and reinforce the need for change.

I was familiar with the pregnancy and vaccines issue because I was reading about it in the papers. So all I had to do was list the names of journalists that had written about similar and/or related issues, then contact them via email (easily available on news sites) or via Twitter to see if they’d be interested in picking up the story. While anyone can do this on a subject that they’re familiar with and interested in, communication agencies like Redhill are also a great ally in reaching out and speaking to multiple media outlets.

The first journalist I contacted had direct access to the government via the daily COVID-19 press conference. I shared my prepared summary with them, focusing on the information I thought they would be most interested in, and emphasised why this change was needed for pregnant women.

The next day, they were able to ask the government directly why pregnant women were still not eligible for the vaccine and confirmed to me that they would release the story.

I knew that it wasn’t just about what I wanted to say, but how I would make myself heard — and more importantly, by whom.

If the issue is of public interest (as this one was), not only will it be easier to gather supporters, but doing so in numbers will also help convince stakeholders of its importance. After all, there is strength in numbers. The fastest way to reach a wide audience is through social media, which is unbeatable for generating public interest and engagement.

I did two things. First, I launched a petition on change.org and gathered supporters around it. I also took every opportunity to share the link on carefully selected social media channels to engage with the people that I felt would most likely support it, such as GPs, epidemiologists, obstetricians and midwives. Twitter seemed the right platform for this as many doctors, health organisations, journalists and politicians exchange thoughts on it.

After posting the petition, I decided to also leverage the small yet vocal opposition to the vaccine. Therefore, I took the time to respond to people who were against vaccination on social media and sharing the petition any time it seemed fit. I knew there was always going to be opposition, especially with vaccination fears so prevalent. But I wasn’t afraid to utilise these debates to create more awareness more quickly around the issue.

While this strategy worked for me because I have a background in public affairs and interest representation (and because I am French and pregnant, so basically craving any chance to argue anyway), we’d always advise businesses to consult a public affairs, media and reputation specialist before deciding to embrace antagonism as part of awareness strategy.

Getting decision-makers onboard is arguably what can make or break your change-making attempt. In some situations, it might be easier to first find an ally among stakeholders who are capable of being agents of change (such as local politicians, NGOs or trade associations) and using your connection with them to reach the media agenda.

In my case, it was quicker to do it in reverse. I laid the foundations by capitalising on media and public opinion to give my cause enough weight and support to catch the attention of key stakeholders. I was aware that critical stakeholders, such as the Royal Australian and New Zealand College of Obstetricians and Gynaecologists (RANZCOG) and the Australian Medical Association (AMA), were likely to be pursuing a similar objective to mine, yet not be prepared to publicly announce it.

I also addressed my petition to key stakeholders who could implement the change, such as Australian Minister Scott Morrison and Federal Minister for Health Greg Hunt.

The result: Setting change in motion

The first article was out within a week, and coverage snowballed from there. National mainstream media outlets such as The Guardian, the Daily Telegraph, the Australian Broadcasting Corporation (ABC) and the Sydney Morning Herald all picked up the subject, as did women-focused publications such as Women’s Agenda. As a result, it received nationwide attention.

Ultimately, my four-week campaign worked — or more accurately, it helped accelerate the change. A month after I started my petition and launched the campaign, the Australian government officially announced on 23 July that pregnant women in Australia were now eligible to receive the Pfizer vaccine against COVID-19. I myself got my first jab on 31 July.

There were and are still some kinks to be worked out in the system — literally and figuratively — but we’ve achieved our goal of vaccine eligibility. That’s why I’m sharing my experience to prove that change is possible with the power of awareness, even if it’s just a little thing in the world.

The lesson: Action starts with awareness

In 1963, the American political scientist Bernard Cohen once said that the press “may not be successful much of the time in telling people what to think, but it is stunningly successful in telling its readers what to think about”.

What was true then is even more so now, especially in this ultra-connected world where news is omnipresent. That’s why awareness must be paired with the right platforms to maximise its true potential.

In the end, awareness isn’t necessarily about getting people to agree with you. It’s about making people realise and think about an issue, which encourages better understanding, meaningful discussion and even productive action.

That’s the first step towards real change in the world — and a little bit of awareness is all it takes.