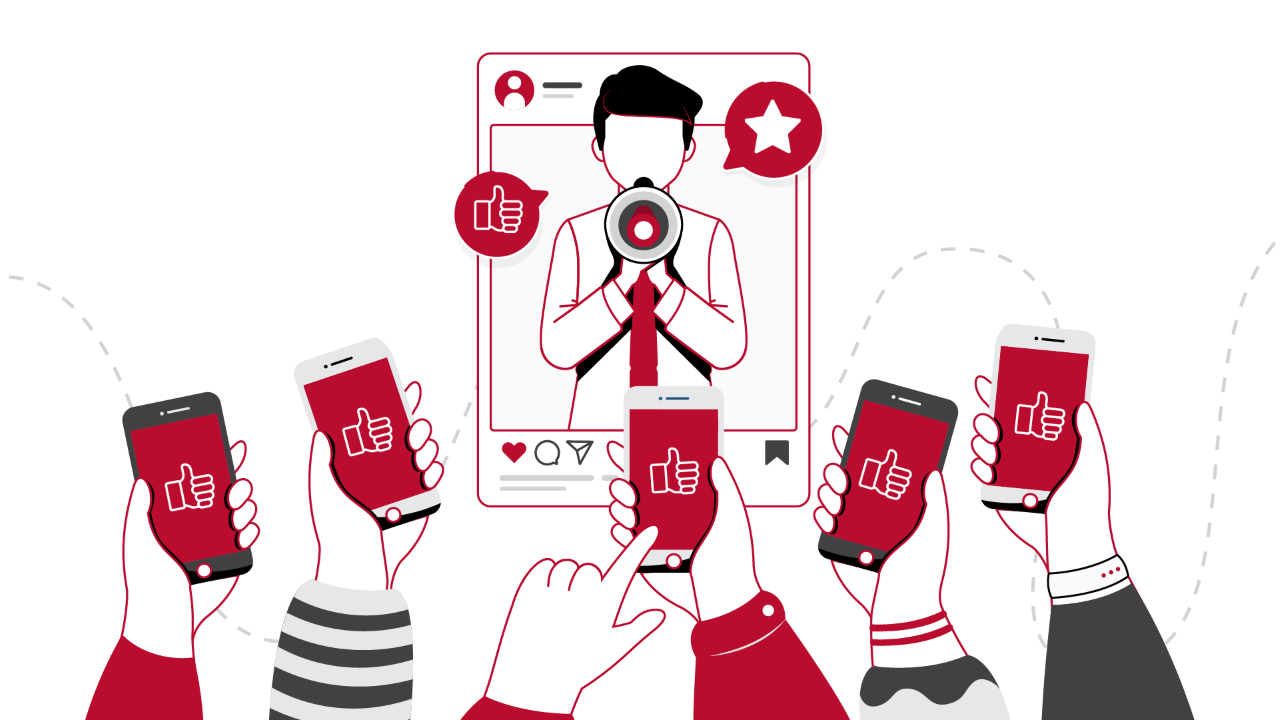 Investigating the political influence of micro-influencers

Are our political opinions truly ours?

Something happens every time I start a political conversation with my peers.

These conversations rarely begin because of something we read on the news or see on TV. Instead, they’re usually sparked by something someone else said — mostly the social media influencers that we follow.

It’s always “Hey, did you see what Influencer X posted about the election?” or “Whoa Influencer Y supports that politician? Why would they do that?!”

Then I started to wonder: why are social media influencers always the political conversation starters for us instead of the actual politicians? Why do their opinions matter so much to us, given that they’re not exactly working in the line of policymaking?

These questions kickstarted my journey to understand both the popular appeal of social media influencers and how that helps them impact the political sphere — and here’s what I learned.

What’s so great about influencers?

Social media influencers are defined by their ability to attract, engage with and retain audiences. That’s part of what makes them so appealing, and why people watch/listen to them.

Their content is often bite-sized, easily digestible and frequently uploaded — great mental markers for keeping their content engaging and memorable. They also use a variety of formats to engage with their audiences, which contributes to the building of one-way parasocial relationships with them. These involve the audience extending their emotional energy, interest and time to engage with the influencer’s online persona.

Some influencers post personal details about their lives and relationships, giving followers an intimate glimpse into their world. Others take it a step further by addressing audiences directly in their content, such as in video monologues of their thoughts and experiences, and even asking for their feedback in the comment and message sections.

This accessibility and responsiveness make followers feel like the influencers are their real friends and have a genuine connection with them. We know that friends and family are very influential in our decision-making through peer presence — and these social relationships tap into trust, which affects our choices as well.

The unseen power of micro-influencers

The borderless marketability of influencers makes them the ultimate platform to spread information, entertainment and more to millions. I mean, Kylie Jenner averages over 10 million likes in her top Instagram posts — that’s more than the population of some countries!

This impressive reach, coupled with tools and algorithms that enable influencers to segment their audiences by demographic, geography and more, further amplifies influencers’ impact on people’s opinions and behaviour.

While we’ve talked about superstar influencers that reach millions of people, I actually find that the most effective influencers (at least for me and my friends) are the micro-influencers.

We gravitate towards people that are like us. They go to the same places, have the same interests, speak our language and are in similar demographics as us. Micro-influencers tick all these boxes. They could very well be our next-door neighbour or a friend from work.

Because of their lower follower count, micro-influencers also rarely have large sponsors to please. Their content comes across as rawer and more personal, which creates a greater sense of authenticity and makes it more engaging and impactful. When we watch their content, it sometimes feels like we’re huddled around a campfire with them, casually talking about life.

I’m not the only one who feels this way. More studies have noted that there is an increasing perception of micro-influencers being more authentic and credible, due primarily to their personal engagement and reduced need to pander to higher powers.

In my opinion, these are the crucial differentiators for the success of micro-influencers in leading conversations among everyday people.

With fake news and misinformation abound, there is higher demand than ever for authenticity in content and personality. Micro-influencers are already positively associated with authenticity and honesty, which gives them more power as thought leaders, even for a smaller audience.

Multiply that effect by the number of micro-influencers, and they can even turn the tide of political thought.

In my local Singaporean experience, the impact of micro-influencers on the 2020 General Election was huge. Micro-influencers took it upon themselves to become pseudo-political bloggers or citizen journalists, conducting livestream interviews and public dialogues with various political parties.

They would also subsequently share their own anecdotes on what they truly thought about different candidates, as well as encouraging wider voter turnouts.

The grassroots nature of these efforts, in my opinion, was the main reason for the ability of micro-influencers to raise greater awareness and more diverse political discourse. They seemed more ‘in touch’ with heartland communities overall and the voice lent to the ‘everyday man’ made them more relatable to general audiences and captured their interest.

This, I believe, was instrumental in the year’s election results establishing one of the most diverse party-demographic of parliamentary seats in recorded history.

This phenomenon wasn’t isolated to Singapore. In the same year, I witnessed micro-influencers also working their magic on other countries’ elections.

For example, micro-influencers acted much like small-scale broadcasters for the 2020 Biden-Harris presidential campaign, which was aimed at youth voters (those in their early 20s). This was significant because this demographic relied less on syndicated broadcast networks for political news, but did spend a lot of time on social media.

So powerful were these ‘micro-influencer armies’ that President Biden’s political campaign garnered twice the social media impressions and interactions in his top three election season tweets, compared to then-President Trump’s, despite having only an eighth (11 million) of Trump’s 87 million-strong Twitter following.

This also proved instrumental in swaying swing states and ultimately contributed to a Biden victory.

Micro-influencers are already positively associated with authenticity and honesty, which gives them more power as thought leaders, even for a smaller audience.

Protecting ourselves from unchecked influence

There’s no doubt that micro-influencers have been very impactful in the political sphere. At the same time, I can’t help but think if we’re being overly reliant on their views to shape our own. After all, micro-influencers are still people — and people are flawed. So how can we be sure that there are no ulterior motives hidden in their content?

In general, political micro-influencer content can be pretty imperceptible. They usually paint a rosy picture of how the promises of their favoured politician or party can improve their own lives — and, by extension, ours — and frame it as their personal, unbiased opinion.

However, not all micro-influencers are aligned with our own interests. So how do we protect ourselves from being politically exploited?

We can first recognise that micro-influencers may not have big brand sponsorships or endorsements, but that doesn’t necessarily mean they have none. Despite how ‘authentic’ they may seem, they can still have vested interests and hidden agendas, such as spreading certain messages or content to get paid or boost engagement numbers.

In the political sphere, politicians that use political ad targeting to spread geopropaganda, political content disseminated based on location data, are increasingly realising the power of micro-influencers and are employing them as part of their strategy.

Influencers can sometimes be hired to highlight the positives of their sponsored political party to boost voter turnout, and there have also been instances where influencers were hired to slander political opponents.

The resultant overwhelming spread of both political information and misinformation has subsequently led to some authorities requiring that micro-influencers disclose all endorsement deals and include affiliate links on their posts.

Fortunately, with such regulations, we’ll now be able to search for hashtags or endorsement indicators to confirm if a political post we’re seeing is a paid ad, which helps us check for biases.

Having statistics on a social media post makes it seem more credible, but it’s still the onus of any discerning adult to verify those numbers.

We’re usually sceptical of politicians because even high-profile politicians can make inaccurate claims. Given that most influencers — micro or otherwise — aren’t even working in or are experts in politics, it’s even more crucial that we maintain that same level of scepticism for them.

This habit of reading widely and consuming news from multiple sources can help us catch certain nuances — both in influencer content and content in general — such as biased reporting or patronisation, which may fly under the radar if we stick to the same thought bubbles.

These newfound analytical skills will be instrumental for us in building critically thought opinions, accelerating our journeys to becoming informed citizens.

At the end of the day, we can’t rely on others to dictate the opinions we should or shouldn’t be having. There’s a lot of talk about the responsibility of social media sites to curb fake news or hate speech. While there is some truth to that, the reality is that the responsibility of forming our opinions begins and ends with us.

We must consume content critically from all sides, even when it seems like it’s coming from trusted and reliable sources such as micro-influencers. While they may have charisma and relatability, this doesn’t mean that they also have our best interests at heart.

Despite how ‘authentic’ they may seem, influencers can still have vested interests and hidden agendas, such as spreading certain messages or content to get paid or boost engagement numbers.

To be the most informed and independent thinkers that we can be, we must and should always open ourselves to different informational sources, as well as constantly challenge even our own opinions and biases.

The growing overlap of social media and politics is fascinating, but no matter how many influencers come our way, the choices we make — and the consequences that follow — are ultimately our responsibility.

Should social media platforms be the arbitrator of truth?