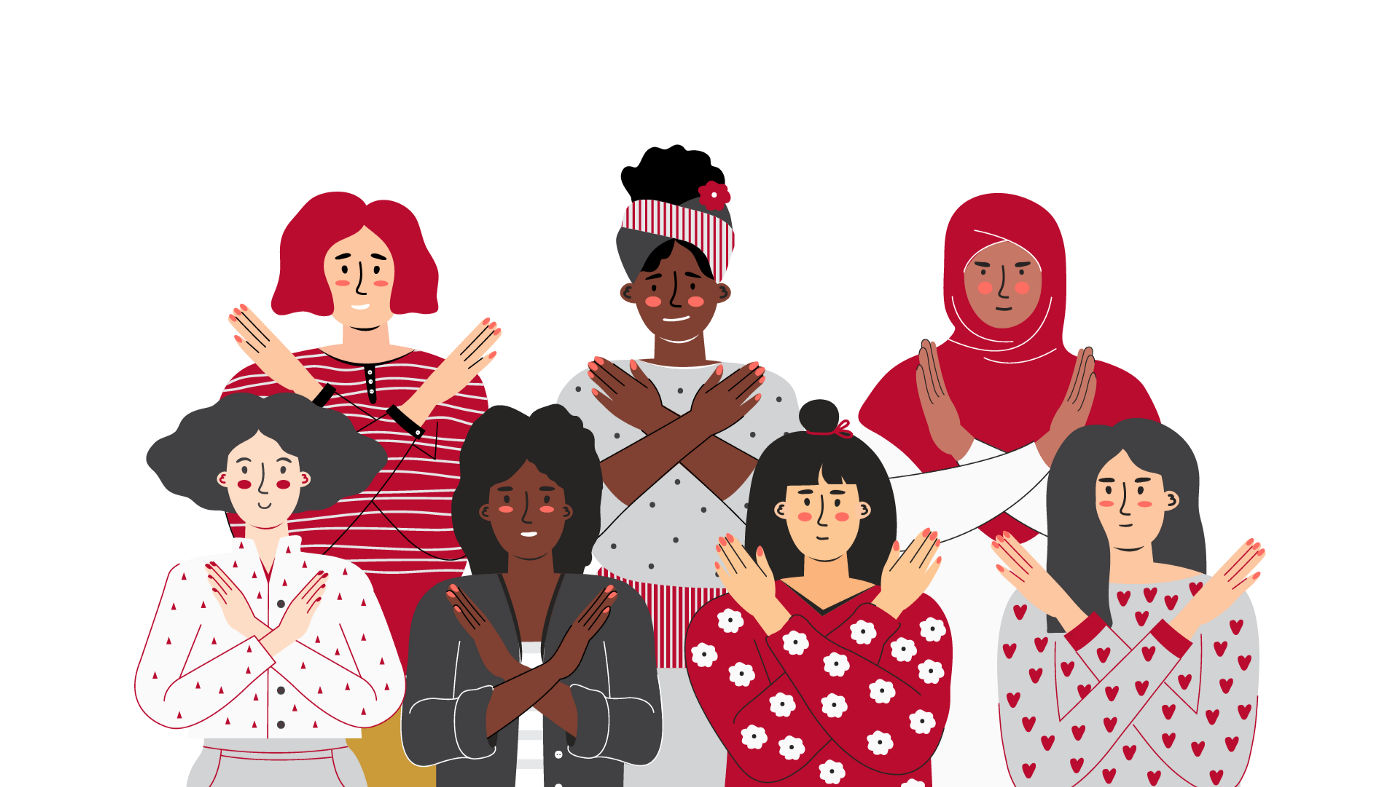 Breaking the bias must be your choice

Every year, International Women’s Day triggers a flurry of conversations and activity around women-based issues. The media prints articles on pay disparity and discrimination. Politicians and business leaders declare commitments to changing the conversation. Brands roll out campaigns and hashtags alongside donations and discounts in support of women.

These efforts all keep gender inequality in the spotlight, which is important so we can keep having conversations about it and raise awareness. But at the same time, it’s hard not to feel like we’ve talked about these issues to death.

For literal centuries, we’ve been highlighting how women everywhere are facing the real-world consequences of inequality on a daily basis. The right to work. Right to vote. Gender roles. Pay disparity. Career advancement. The issues have evolved with the times, but the general idea remains the same — unfair treatment of women.

Awareness is only the beginning of the solution. It’s past time to move the conversation on. We need to stop fixating on the 5W (why, where, what, when, who) and focus on the 1H (how). It might be the last letter in the 5W1H acronym, but the H is actually the most important part of this conversation: how do we fix this?

Bias is “our” problem

The theme of this International Women’s Day is #BreakTheBias. It’s fitting because inequality begins with bias. It’s in the very definition; put simply, bias is unfair treatment, an inclination towards one thing over the other.

Bias first occurs at a personal level. It’s deeply rooted within us, affecting our thoughts, emotions, actions and judgments. It can stem from and be reinforced by the smallest actions. It shapes and colours our view in subliminal ways, and over time becomes unconscious yet ironclad belief.

But this invisible, intangible force has real impact. It manifests in how we judge people by our expectations. It’s implied when we make decisions based on what we think. It rears its ugly head in what we deem ‘acceptable’ behaviour.

For literal centuries, we’ve been highlighting how women everywhere are facing the real-world consequences of inequality on a daily basis. But awareness is only the beginning of the solution.

While both men and women can be victims of bias, it’s a fact that women receive a disproportionately large share of the burden. In 2020, the Gender Social Norms Index by the United Nations Development Programme (UNDP) revealed that close to 90 percent of both men and women held some sort of bias against women. That’s a sobering statistic.

If bias is the added weight tipping the scales against women, it stands to reason that balance is only achieved when bias is eliminated. But anti-bias recommendations are usually framed in organisational terms. Implement new rules. Create safe spaces. Establish new policies.

These are necessary, but it’s akin to mowing a lawn to solve a weed problem. If you don’t rip weeds out by the roots, they’ll just grow back. And the root of bias is buried deep within all of us, so we need to cut to the heart and address bias at an individual level for wider policies to be effective.

Regular people read anti-bias recommendations, see nothing that they can personally do, and mentally offload that responsibility to the leaders to solve. Eliminating bias then becomes “their” problem to resolve, not “my” problem. To avoid this game of taichi, as we say in Asia, we need to empower everyone to recognise, acknowledge and manage bias within themselves.

Because bias is “our” problem, and it’s up to us to solve it.

The cycle of bias-breaking: Acknowledgement

Individually, the first thing that we can all do is acknowledge our biases. People who are biased — against women, but also in general — rarely know that their beliefs are biased.

A female friend of mine told me just last week that the CEO of a company she was once in would say in board meetings that “one of the women should take the meeting notes”. When she resigned, he offered to help her find a job in sales. He thought she’d do well because she “has a pretty face”.

I like to think the CEO should’ve known better. But to play devil’s advocate, the CEO is an older man who came from a generation where gender roles were more pronounced and were status quo. He may genuinely not have thought that his statements were discriminatory, so confrontation would’ve been ineffective.

In fact, there’s a high chance that he would’ve found the outrage confusing (or even insulting!) and/or shrug that “it’s always been this way”. That’s likely to actually be true, too, especially in patriarchal societies.

We instinctively avoid people that have beliefs that we find distasteful, including sexist beliefs. But excluding them from conversations doesn’t expose them to alternate views and give them a chance to challenge their own biases.

It’s not the easiest thing to do, but we can strive to include them in positive discourse and show them a different point of view. We can (with civility) debate and discuss the reasons behind these biases to understand where they came from and how to address them.

However, self-control is also important. Don’t let the conversation devolve into one party trying to force their beliefs on another. People must be allowed to make up their own minds; browbeating them into it isn’t true acceptance and won’t do anything towards addressing their biases. It may even reinforce them.

Regular people read anti-bias recommendations, see nothing that they can personally do, and mentally offload that responsibility to the leaders to solve. Eliminating bias then becomes “their” problem to resolve, not “my” problem.

The cycle of bias-breaking: Recognition

The next important step is recognition. People may know about bias, but they might not make the connection between bias and the types of negative behaviour that it encourages.

Gossiping is one example. It doesn’t come across immediately as harmful because there’s no confrontation. But it is. It actively undermines someone, can do a lot of damage to their reputation, and perpetuates bias against them.

At a former workplace, there was a woman who was promoted quite quickly. Despite everyone acknowledging she worked hard, rumours still sprung up that her promotion was because she often ate lunch with the (male) boss. Even women spread the gossip, which underlines how insidious it can be.

Comedy is another grey area that is difficult to navigate. If done right, comedy can be a great vehicle for awareness, but it’s also often used to excuse biased behaviour.

I’ve heard sexist comments about a woman’s appearance, weight or menstrual cycle, always with the “it’s just a joke” disclaimer attached. Accepting this excuse teaches people that condescension is okay if veiled under the guise of humour. And it’s not.

If bias is the added weight tipping the scales against women, it stands to reason that balance is only achieved when bias is eliminated.

The line between harmless and harmful is very fine. We need to have more conversations about and be more open to understanding what might constitute biased behaviour and language, as well as the impact it can have in various settings.

Next, we need to recognise this behaviour in ourselves and stop ourselves from being part of the problem. It’s tempting to join the gossip train or laugh at/make a sexist joke to feel included. But think deeply about whether that sort of behaviour is really something you want to perpetuate or stand for.

Finally, we must be brave enough to stand up and call out this behaviour in others when we see it so that they can’t claim ignorance as an excuse. It’s not going to win the most popularity points, but awareness starts when people speak up.

The cycle of bias-breaking: Action

The last step, of course, is action. People may acknowledge their bias and be able to recognise biased behaviour, but they may not be willing to do anything about it.

This is usually a combination of two reasons: not wanting to be labelled as being “too sensitive” and getting ostracised, as well as simply not caring enough to actively check themselves and do things differently.

For the first example, we can show people that taking a stand doesn’t mean that they must be aggressive or confrontational. Even the smallest acts can be meaningful.

We can, for instance, simply refuse to participate in conversations with discriminatory language or say politely that it isn’t welcome. We don’t have to make a big deal or show of it — simply be firm and consistent.

We may get some mocking or backlash at first, but it also forces other people to think about the fact that they’re actively defending sexist behaviour, which is very different to unconsciously perpetuating it. Once one person is willing to stand up, you might find that others will join them, too.

I once overheard someone making degrading comments about a female colleague’s size. This went on for a while until another person said, “Hey, that’s too much. She’s really smart and has been great to work with.” The first speaker tried to awkwardly laugh it off, but thereafter the insults stopped. The callout wasn’t aggressive, but it worked. That’s why it matters.

We must be brave enough to stand up and call out biased behaviour in others so that they can’t claim ignorance as an excuse. It’s not going to win the most popularity points, but awareness starts when people speak up.

The second case is harder because it’s tough to give people a reason to care if they can’t find it themselves. Saying things like “but think of how you’d feel if someone said that about your sister or mother” usually comes across as nagging or being holier-than-thou, and people don’t react well to that.

We can’t control how others think and act, but we can control what we do. If we lead by example in consistently striving to be fair and thoughtful in the choices we make, we might inspire others to do the same. Over time, this could lead to a multiplier effect and even change entrenched culture for the better — but don’t expect it to be a fast process.

Breaking by choice, not by command

One of the key messages of this International Women’s Day is:

“Individually, we’re all responsible for our own thoughts and actions — all day, every day.”

In the spirit of that message, what I want to get away from is the idea that we need to wait for others to start doing it or to tell us to break our biases. It’s always easier to be pushed into action instead of overcoming inertia through the strength of our own initiative.

But our biases are our own. Breaking them is a responsibility and a decision that cannot belong to anyone else.

We are all the problem, but at the same time, we can also all be the solution. When people make their own choices to do something that they believe is right, then they’ll give it their all. That’s where lip service ends and real advocacy begins — and the only way that bias can ever truly be broken.